Do you need a developer to build an application for you? Apps Jobs is part of the 101 group of websites which get over 1.5 million page views a month and 500,000 visitors! With that kind of interest, you’ll know that your advert is getting to the right people.

One of the first places that developers are going to go to when they’ve finished their current iPhone/iPad, Android, BlackBerry or twitter application is somewhere they can showcase it, and then on to find a new job, all on the same page! 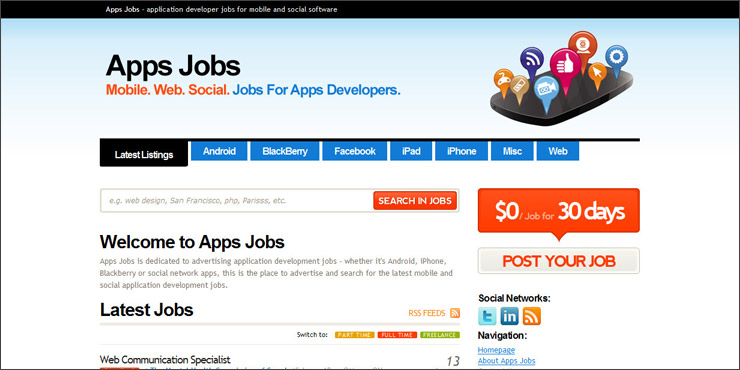 Following on from the success of 101 Best Android Apps, we decided to take the idea to the next step and so we built 101 Best Blackberry Apps. The idea is simple, we ask people to submit and rate applications for the Blackberry smartphone.

What started out as an idea for rating the best websites has proved itself to work just as well across multiple formats, the 101 Best Blackberry Apps site is just the latest in a line of sites that we continue to work on and improve whenever we have spare time between our client work.

Please let us know if you have any ideas for future developments, as we’re always ready to improve and update things.

This is one of our latest additions to the 101 Best group of sites. It was created to showcase the growing number of websites using the new HTML5 coding standard. 101 Best HTML5 Sites has become one of our fastest growing sites, helped, in part, by the ongoing debate between Apple and Adobe around the use of Flash on the iPhone and iPad.

We have a large number of sites featured and we are gradually converting 101 Best HTML5 Sites into the new coding language wth some CSS3 elemements added – it’s as much a training website for us as a useful resource for those people who want to find out more about HTML5 and what’s possible.

If you’d like to know more about HTML5, you can read our blog post: HTML5 and new web standards.

After the success of 101 Best Websites we started thinking about other ideas that could utilise the same functions and similar layout. One of our first ideas was 101 Best Android Apps – a gallery of mobile applications for the Android mobile OS from Google.

If you’re unsure what Android actually is, we wrote a post about it: So, what is Android?.

We started 101 Best Websites as a basic idea in early 2008. We wanted to create the ultimate design and web standards showcase site – easy to use, fully featured, functional, well designed. It stayed as that idea for almost 6 months.

Finally, in July we decided that enough was enough and we had to do something about the site. That’s when the idea for “Build a web app in 48 hours” came to us. We set aside a weekend in August 2008 to finalise the design, code the templates and build the initial application. View the blogs we wrote at the time.

The site itself still isn’t finished, we have so many more ideas than we have time to code them! But the site is now one of the top CSS showcase sites with over 500 visitors (2,500 pageviews) a day – and that’s growing steadily, by the time you read this it’s probably going to be nearer 1,000 visitors a day. The site has surpassed our initial expectations and we hope to be spending another couple of weekends this summer to get all the little extras added. We’re currently asking for new ideas for the site and how our visitors would improve the experience, add your comments about 101 Best Websites.

In 6 months we’ve had over 800 websites submitted to us and over 32,000 votes on the site. We accept submissions of high quality CSS/xHTML, Javascript and Flash websites. The voting system gives everyone a chance to have their say on what should appear in the top 101 sites for each category and tag. Over the next few months we’ll be adding a more in depth comment system and “friends lists” with the ability to save your own top 101 sites.